And it happens again, yet another real-estate driven discussion in the lunchroom. It is February 2017, and despite red hot warnings from the CMHC, economists, and financial bloggers around the globe, my Canadian coworkers show no sign of stopping their usual castle-hunting ways.

After all, renting is just throwing your money away, right? And those warnings are really only for Vancouver and Toronto, right?!

I decided to take a trip into the Central Okanagan Mainline Real Estate Board‘s data archives. They produce very lovely monthly reports dating back to 2002, which show median and average prices of various types of real estate, including houses (residential), condos, and townhouses. Even better, they also have a handy report that shows average prices for all of these types of property dating back to 1987. While the old reports don’t show median prices, I extrapolated these from the average prices because the following correlations exist between average and median prices:

But here’s the short version – I wanted to know what the real trends in real estate prices were in my region – the Central Okanagan. And here’s the data. 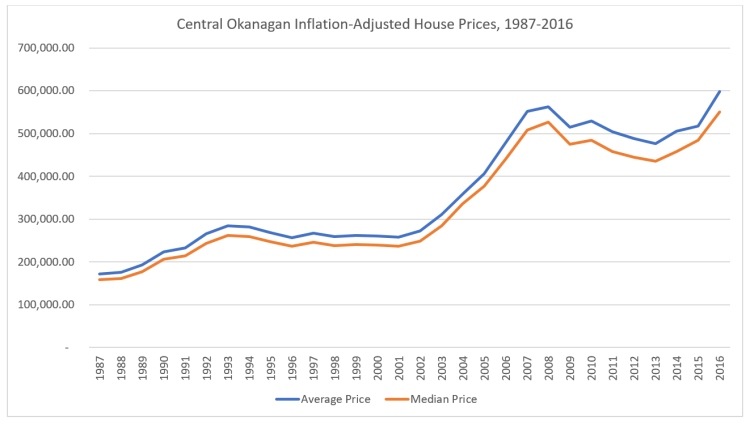 You see that little uptick in 2016? You’re not imagining things, an average priced home was actually $600k. This is higher than even 2008. Just looking at the steep slope in the past three years, does that really look like a nice, stable trend? In fact, does anything since 2002 look anything like a nice stable trend? 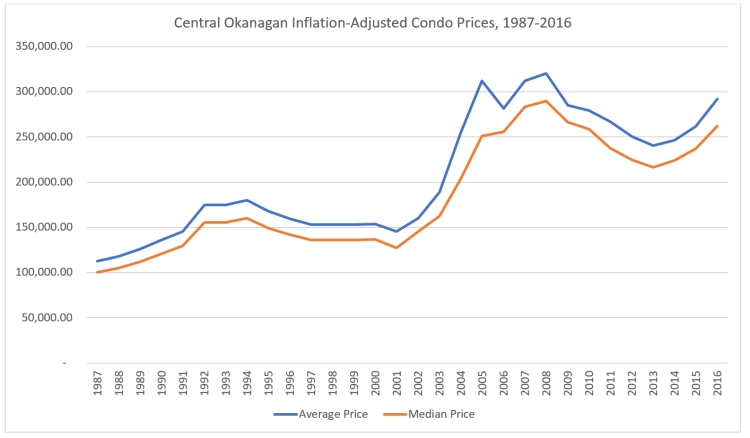 And if you’d like some even crazier volatility, check out those spikes. And again, ooh, look, a very steep upswing in the last three years. 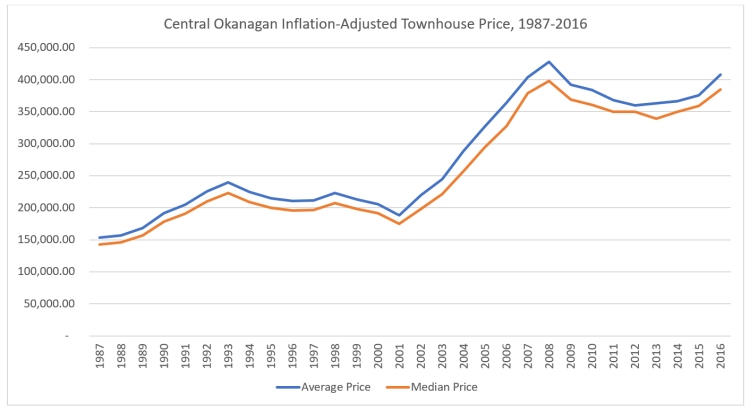 Slightly less volatility in the townhouse market, but even then, check out the upswing, and the crazy 45+ degree slope from 2001 to 2008, compared to the even movement between 1987 and 2001.

Each and every one of these graphs shows increasing prices, with housing prices even higher than the peaks of 2008. The high step-up, year-over-year, is completely insane, and can only be followed by back-breaking, stomach-lurching falls. A property you buy now is not going to increase in value, at least not for more than a few months, maybe a year. And I’m not the only one saying this.

And yet again, and again, lunch after lunch, casual conversation after conversation, all I hear is talk of mortgage specialist appointments and “Oh, we’re looking for a house!”, or, even more upsetting: “I just bought a house!”.

And always with a smile. Always a smile. I die a little inside every time.

I work with accountants, people who excel at math and detail-oriented thinking, many of whom have years of experience in financial advisory roles. These are the people giving advice on how to succeed in the market – maybe not the housing market, but markets all the same.

If seasoned business advisors are buying houses when it took me less than two hours to pull up terrifying, not-good graphs of this very region, what exactly does that say about the general population?

Let me give you a breakdown. Before 2002, which you can see in the above graphs, is when everything went haywire, these were the average inflation-adjusted median prices:

The inflation-adjusted medians prior to 2002 are reasonable – they fall in line with median incomes. The median family income in 2015 (no need to go back further as that’s the point of inflation-adjusting) for the Okanagan Valley was $56,851 (per this report). A house price falls nicely at 3.95 this income, which is in line with the much-said 3-4 times rule, if a little on the high side. Maybe that’s the sunshine tax, who knows.

But after 2002? Check this out, inflation-adjusted median prices average out to:

Suddenly, a house costs 7.63 times an average household’s income. Some of this might be from low low low interest rates, but can I say one thing:

I’m calling it: Fill the moat. Draw the drawbridge. Heed me and do not enter here.

I wouldn’t buy an Okanagan Valley castle for those prices even if it had the prettiest moat in the entire universe and a legitimate tower library.

And it took me. Two. Hours.